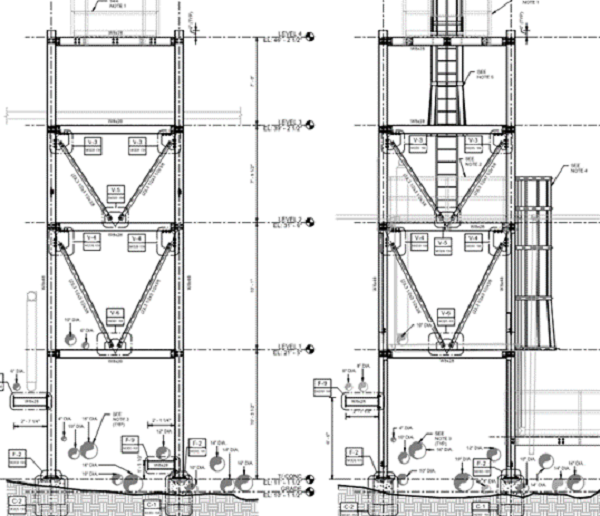 As a recent graduate working for Brindley Engineering, I was asked to complete a structural engineering design of a new pipe stanchion in one of the outside battery limits (OSBL) areas at a Midwest refinery. You may be thinking, what is a stanchion? A stanchion, in this case a “pipe stanchion”,  is a free-standing support structure, in this case a pipe support structure, commonly used for larger piping loads or when there isn’t another nearby structure to use for supporting pipe. The existing pipe stanchion is mainly made from steel HSS members and is protected by fireproofing throughout. Due to excessive concrete spalling/cracking, parts of the HSS members were exposed to the environment, causing the steel to heavily corrode and in some areas experience severe section loss. To design a new pipe stanchion, Brindley Engineering had to carefully take field measurements of the existing pipe stanchion and document all the locations of the pipes and platforms. The new pipe stanchion design consists of new steel members that can support all the existing pipes and platforms.

The construction of the new pipe stanchion will begin in the 2021.  I can’t wait to see the results of my first design as lead engineer! Update as of 2.1.2022 – the project launched in late 2021 and I couldn’t be more proud to see my structural engineering design in action!

A visual inspection of the existing pipe stanchion was made. Necessary measurements and detailed photos were taken of all the members in the existing pipe stanchion as well as all the pipes that are supported by it. Once all the field notes were completed, this information was sent to the designer to verify that they match the scans of the pipe stanchion taken in previous months. Once the field notes matched the scans of the pipe stanchion and all the steel members were selected for this specific stanchion, the BE Designer began to draw a new pipe stanchion in 3D CAD. While this was happening, I began to make necessary calculations for all the steel members to make sure that each member in the structure will not fail under the different loads that are being applied from the self-weight of the steel as well as the static and dynamic loads applied to the pipes and platform on the structure. Once the calculations were complete and I reviewed the internal prints, they were sent to a licensed Professional Engineer for further checking and stamping.

This was my first project as lead engineer and is just one example of what a new engineer can expect to be involved with at Brindley Engineering.