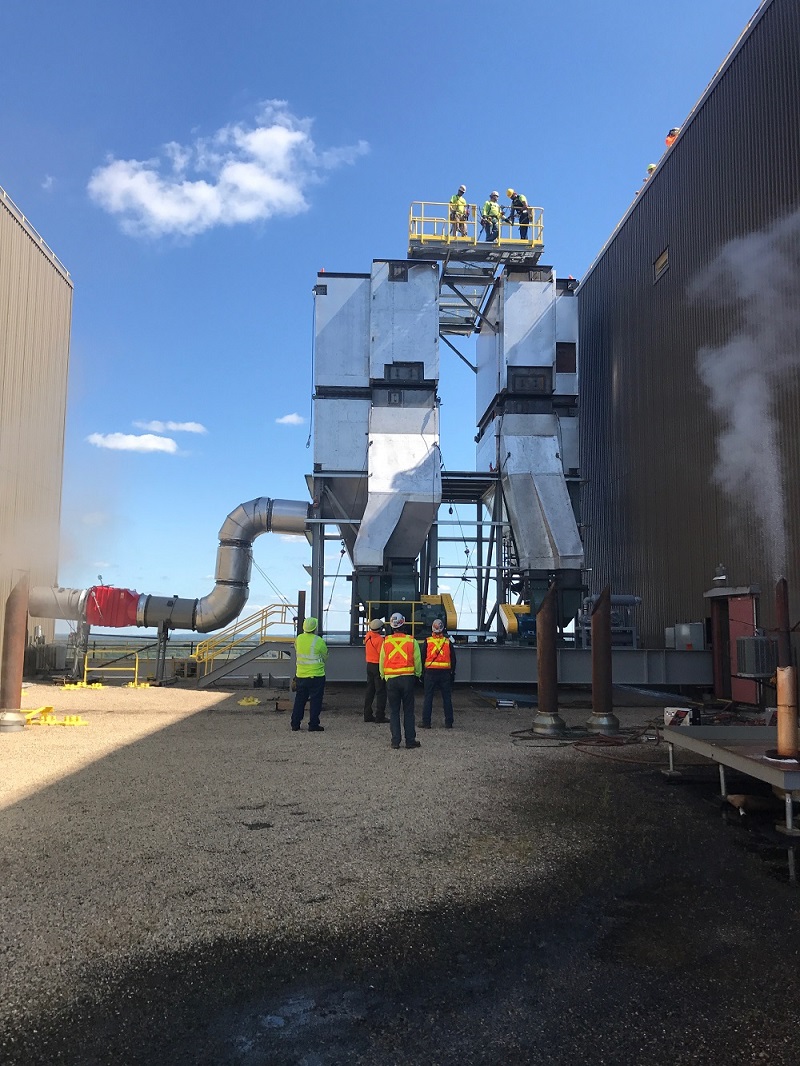 Out of the Box Solution in Action

In part 2 of this series, we talked about Creating a Plan for coal dust collection for this project.

In this final part of the series, we will discuss executing the Out of the Box Plan…

Executing the Out of the Box Plan

The helicopter lift was scheduled, and our team went to work on prepping the roof for the baghouse platform.  The large structural framing columns in the deaerator bays had to be check for all new loads.  Wind loading was of particular concern because we would be adding (2) new 45’ tall baghouses attached to the top of (4) existing columns.

We conducted the structural engineering condition assessment and new loading evaluation on the framing bay all the way from top of columns down to the foundations.  It was found that, in order to place our new structural steel platform for the baghouses on the top of the columns, that first the columns needed new vertical bracing several floors below the roof.  This new bracing was large, but it was still able to be fabricated on site and installed while the plant was running.  The tops of the columns were also modified and extended upwards to accept the new framing support platform.

Connections were designed to fit in with the minimal time that the iron workers had to work and set the new support framing onto the tops of the existing columns.  There was only a 10-minute hovering window to work with.   This was much different than a traditional crane lift.

There was going to be a total of eight lifts over two days from Friday at noon until Saturday at 3pm.  The heaviest lift was estimated at 18,780 lbs.  The two baghouses and all associated structural steel support structures, ductwork, fan skids and building framing was being fabricated and built on the ground of the power plant near where the helicopter would take off and land.  The helicopter would take off and circle around to the rigging zone.  There the rigging of equipment would be done, and the helicopter would then fly its load north past the plant Unit 1 stack and above the Deaerator roof between the two boiler buildings 240 feet in the air.

Safety was an extremely important part of this installation and we spent several weeks in training and going over the plans in detail with the plant and all contractors and personnel that would be on site.  Any non-essential personnel stayed off site for those two days.

Everything went to plan, and the eight lifts worked very well.  Only once did the rigging on the helicopter put a piece of equipment and fan skid in the wrong direction for setting it in place.  The helicopter had to be sent back to the ground and re-rigged so the position of the skid would fit down onto the new structural support platform that was already in place on the roof.

In summary, this project proved that having a forward thinking, creative yet experienced team with a detailed, safe, and smart plan can lead to great rewards.  The project was a complete success.  Safety was always first and efficiency with the helicopter lifts cut down on expensive crane rental and associated equipment.  The plant and utility were also proud to be a part of this project.  Video was taken for use by the utility, and everyone went home safe at the end of the day.  I was proud to be a part of that team.