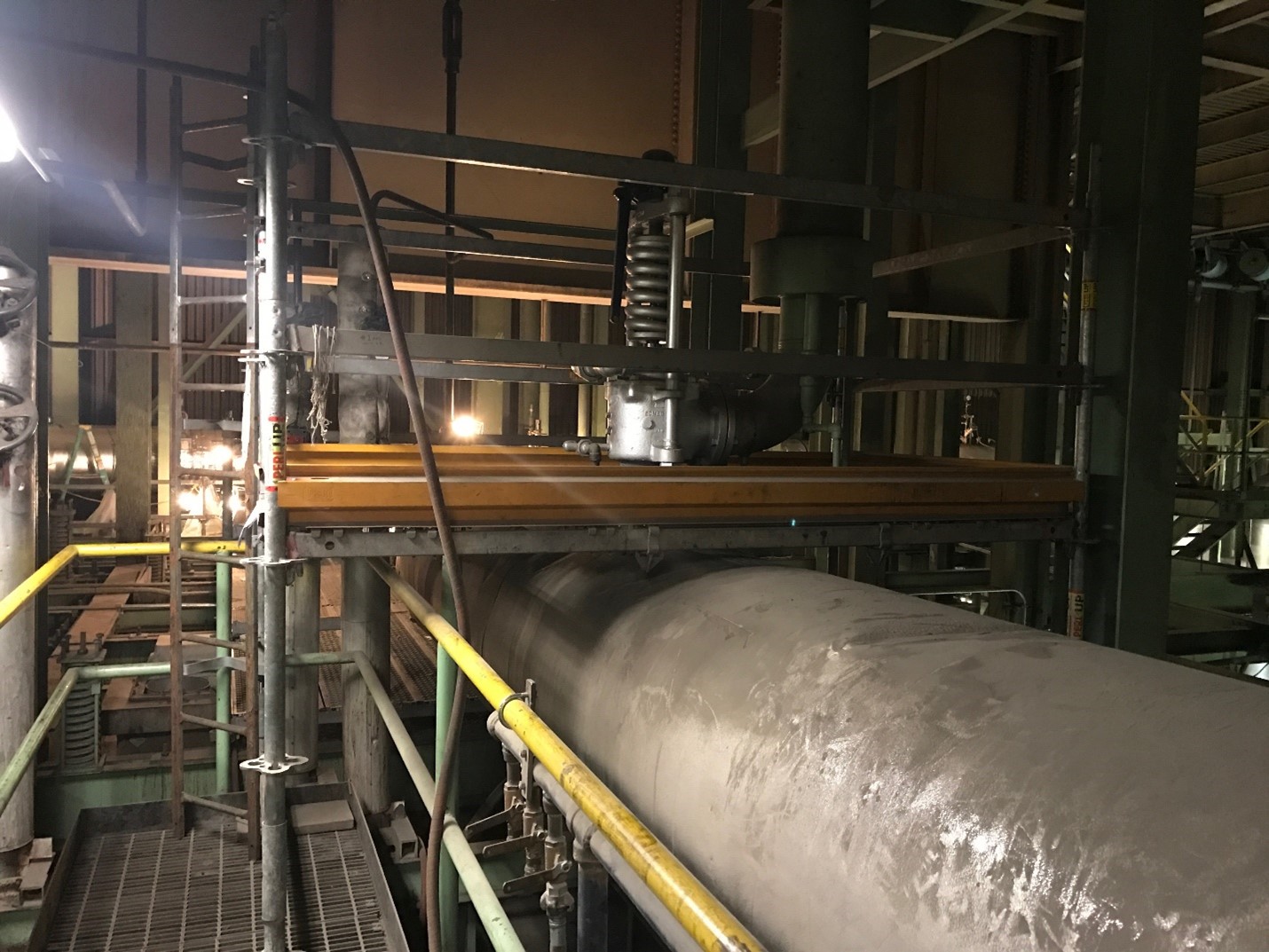 A large midwestern utility needed to replace critical steam line pipe hangers on the Main Steam, Hot Reheat and Cold Reheat Steam Lines that had completed their life cycle over the 40 plus years of operation.  Brindley Engineering’s Power Group was awarded the project to analyze the existing structure and engineer structural modifications to replace (3) three existing, large, engineered pipe hangers with newly re-designed hangers.  In the 40 plus years of operation, the previous pipe hangers had become obsolete and were no longer functioning as designed.

The BE Power Group had to perform a pipe stress analysis for each line, select the pipe hangers required, and verify that the vendor provided data for the new hangers was correct.  At this coal fired plant site, each unit has a boiler which produces steam over 1000˚F, over 2400 psia and a mass flow rate around 3,600,000 lb/hr. The boiler also provides heat for a reheater that heats the exhaust steam of the high-pressure turbine from about 600˚F back up to 1000˚F, at a mass flow rate around 3,200,000 lb/hr and a pressure around 600 psia. The difference in steam flow between main steam and reheating flow is used to supply the last feedwater preheater.  These operating and design temperatures and pressures create tremendous forces on the 24” to 30” high energy piping that was being analyzed and re-supported.

Brindley’s Power Group began the project by meeting with the design representatives from the pipe hanger vendor.  We collected drawings and site photos of the existing conditions.  Existing piping design and hanger design data from the initial design phase of the plant was also collected and analyzed.  We were able to create and perform a pipe stress analysis on each line to verify the vendor’s proposal and ensure that our client was purchasing the correct types of hangers for each individual lines’ thermal movements.

Due to the existing structural framing design of the plant and the newer designs of the engineered hangers, some areas had clearance restrictions and mounting location restriction.  Our group had to run structural framing calculations on the framing for the new points of connection for the support of each line.  This, in conjunction with the piping stress analysis, provided the needed information for the engineering and design of the new high energy piping support points and associated structural steel modifications.  Temporary structural support design was also needed.  This included modifications to the existing framing layout throughout two boiler units and the Turbine Room framing below the turbine deck steel structure.

One of the keys to the success of the project was obtaining correct measurements based off “hot position” of each hanger and associated pipe and comparing that with the “cold position” of each pipe.  This would allow verification to the pipe hanger vendor.  The pipe stress analysis verification would also verify all thermal growth dimensions and confirm design and modifications.  On the ground site work and existing design data was crucial.  Working closely with Owner’s engineers, Brindley’s Power Group was able to collect the needed existing conditions information and verify each design by performing the pipe stress analysis.  Design modifications for new brackets and connection points were completed and temporary support points were located for each line.  The outage started and the project was a success.