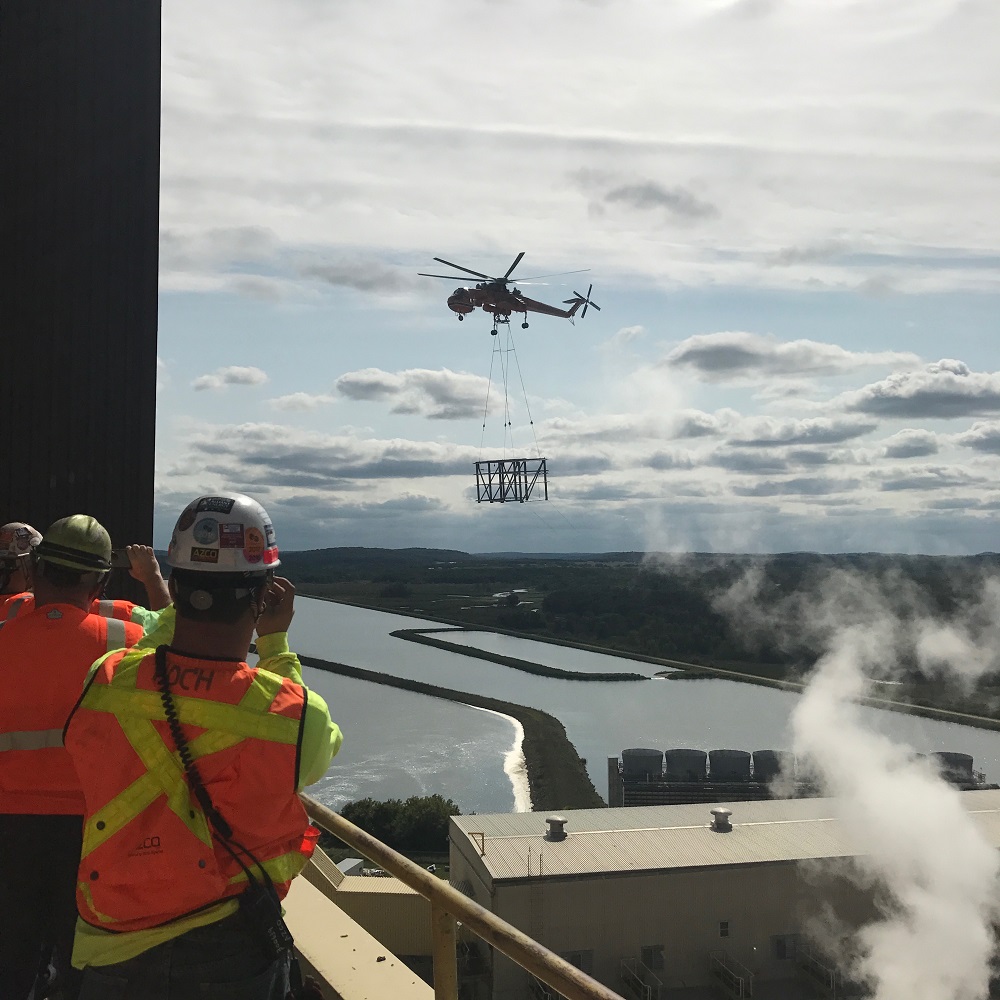 In part 2 of this series, we will talk about Creating a Plan for coal dust collection for this project.

Coal dust collection systems today consist of dust collection baghouse silos, negative pressure pneumatic conveying piping, and suction duct work.  A baghouse collection silo with fans can be quite large when dealing with large quantities of dust.  Locating the silo is also critical when taking into account that the silo is designed to control an internal pressurized explosion.  There is also the issue of introducing new loads and external forces on existing structural framing on or in the power plant.

One of our earliest investigations for the location of the coal bunker dust collection system was how to design and install the system at the upper elevation of the bunker conveyors.  This system sits above the roof of the turbine room building just above the 5 story tall coal bunkers in the boiler house (roughly 85’ above grade).

When our project team looked everything over a few deep questions and issues arose:

Thinking Critically, Together, about Making Improvements

Our team looked at these questions and went back to the vendor for a discussion on alternatives.  The route we were on seemed to work very well in keeping transport piping and duct work material costs low but the route caused issues with constructability, the budget and safety.

The client, engineer, vendor and contractors got together as a team and came up with a solution for the coal bunker dust collection system.  It was decided to think out of the box in order to meet schedule, stay within budget and install the system safely and logically for the contractor while the plant was operating.  We chose to take our new plan to the plant manager and his people.  This ultimately was our team’s client and end user.

The Path Forward: An Out of the Box Solution

We chose to install the (2) 48’ tall coal dust collection baghouses and fans on a 30’ x 25’ elevated structural platform outside on the intermediate roof of the two boiler houses.  This roof was directly above the (2) units’ deaerators – 20’ higher than the bunker conveyor room.  In operation, each deaerator weighs closes to 350 tons.  The columns and all associated column bracing is already designed for these loads but we now needed to check and confirm that we could attach this new framing to the top of (4) existing columns outside with new (very large) dead loads and new wind loads.  We had to be sure that these new loads would be handled and transmitted safely down to the column piers at grade.

In order to get the baghouses and structure up to the Deaerator roof we chose to do something way out of the box.  We chose to bring in an aerial lift company.  This company would bring in a heavy lift helicopter for 2 days over a weekend to lift fabricated and constructed sections of the new dust collection system up and onto the deaerator roof, over 100’ above grade.  The helicopter would have to hover in a fixed position for no more than 20 minutes at a time for 8 planned lifts over 2 days.  Iron workers would have to work to set these sections while the helicopter was operating 50’ above them splashing 75 mile an hours downwind from its rotors.

The plant trusted us and our detailed plan and approved it.